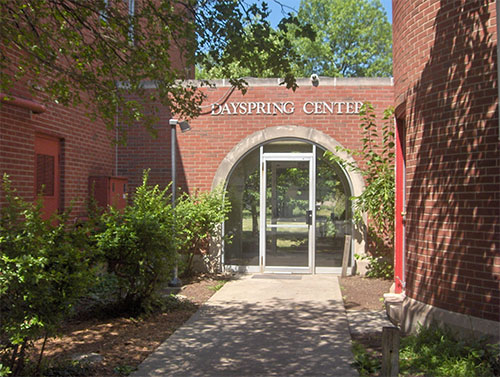 Led by the example of an Episcopal priest opening his doors to homeless persons and offering church pews to sleep through the night, a small group of volunteers began a soup kitchen and overnight shelter in the basement of a local Episcopal church in 1984.

In 1989, a renovated building near downtown Indianapolis opened as Dayspring Center Emergency Shelter, a resource to assist homeless families with children. Over the years, Dayspring has developed into an agency that effectively works to combat and prevent homelessness with comprehensive programming.

In 1998, Dayspring opened Wellspring Transitional Housing to assist former Dayspring residents and other families departing community shelters on the path to independence. Wellspring has 12 apartments where residents can live for up to two years while they work on longer-term goals.

In 2004, Dayspring introduced its Follow-up Case Management (FCM) program, where a case manager works with former resident families for up to 12 months after exiting the shelter program. Unique to Dayspring’s supportive services, the FCM program is critical for stabilizing formerly homeless families as they work towards permanent self-sufficiency.

Last year, Dayspring Center assisted 150 families and over 500 children as they began their journey toward independence. Since its doors opened in 1987, Dayspring has helped over 4,000 families, including 12,000 children, find their way back home.