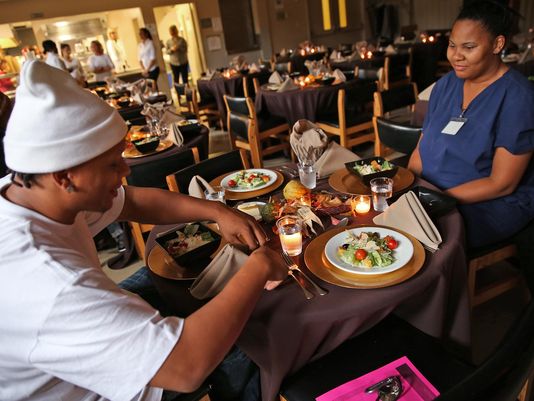 The room is dark, candles flickering atop elegantly dressed tables. One by one, couples and families walk hesitantly into the room, taking their seats, then waiting in awkward silence for someone to tell them their next move.

This is not how dinner at Dayspring Center normally plays out. It’s typically a more relaxed affair, with food donated by community groups and prepared by Dayspring chef Roscoe Chambliss.

On this night, Chambliss ceded control of his kitchen to Jeff Sweet, general manager of Hilton Indianapolis Downtown, and his staff, who volunteered to prepare and serve an upscale meal to the residents of Dayspring, a shelter for homeless families on the Near Northside.

Sweet is no stranger to the kitchen. He worked as an executive chef for more than two decades, so putting on his chef’s hat again to serve a fine meal to Dayspring residents was a treat on Halloween eve, he said.

Shaneka Watkins’ daughter Zaimaya couldn’t wait to dig in to the salad that was waiting for her at a table for four. “It’s wonderful,” she said between bites.

Watkins, her husband, Edwin Palacios, and two children were looking forward to a good meal. But at first, all they could do was admire the beautiful table, dressed in autumn colors of brown and gold.

The family, originally from New York, has been in Indiana for nearly two years but lost the lease on their apartment and contacted Dayspring for help. They moved in about three weeks ago and are hoping to be settled into their own place within the next week or so.

Dayspring, 1537 N. Central Ave., offers housing for an average of 45 to 60 days to homeless families. It can accommodate up to 14 families at a time, which doesn’t begin to meet the need, said Cheryl Herzog, development coordinator. She estimates the center has to turn away 200 to 300 families every month.

Other agencies and nonprofits do their part, including Holy Family Shelter, Family Promise, Salvation Army and Wheeler Mission, but all have limits.— financial and otherwise —  to what they can do.

“People don’t realize how serious family homelessness is in our city,” Herzog said. “Half of the homeless population is families with kids. But you don’t see that. When was the last time you saw a homeless family on the street? They’re moving from place to place, they’re living out of a car, they’re staying in a nightly motel. By the time they come to us, they’ve been homeless for almost a year.”

Friday’s dinner wasn’t about addressing any of these long-term needs. It was simply a chance to enjoy a good meal served with style and a side of grace.

Moms, dads and school-aged kids were invited to the dinner, while younger children were cared for by staff upstairs.

“When they’re here, they’re coming out of stressful situations, and it takes a long time for them to get comfortable. This gives them a chance to relax and not think about their circumstances,” Herzog said.

Danisha Manning, whose two young children had their own dinner upstairs, couldn’t believe the plate that was placed before her, piled high with ribs, chicken and potatoes. “I don’t want to touch it it’s so nice,” she said.

Cheri Jingles agreed. “The presentation is delicious, and I can’t wait. I really do appreciate this,” she said. “We need to sit down and feel at ease.”

Jingles, who cleans at the Indiana Government Center, was dining with three of her children, while husband Stacy worked the evening shift cleaning office buildings.

“I’m gonna have to take a picture so he can see what he missed.”

Jingles and her family landed at Dayspring about three weeks ago after they lost some of their private cleaning accounts and fell behind on their rent. “We lost our apartment and our car, and now we’re here, but we’ll be out soon.”

Seventy percent of the families who stay at Dayspring move out within 60 days to their own place, Herzog said, and may continue to receive support services. Others who aren’t ready for that transition can stay for up to two years at Wellspring Cottage, about a mile north.

From Herzog’s vantage point, the gap between income and cost of living is what swallows up many families in crisis, so even though parents are working, one or two missteps or a medical problem can land them at the doors of Dayspring. 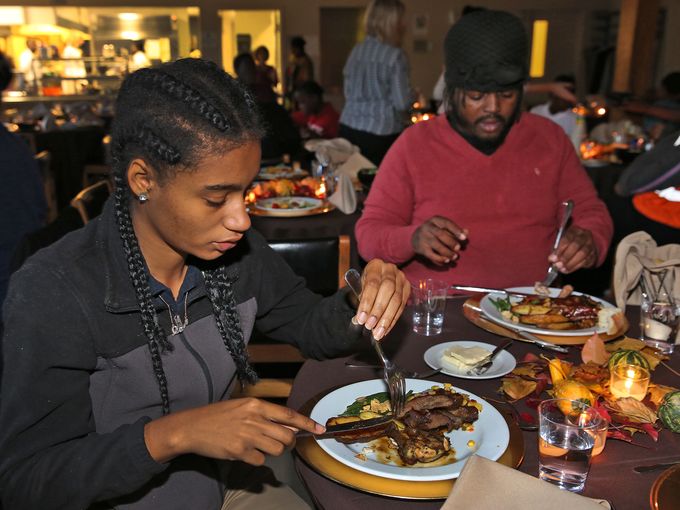 “These are just regular families,” she said. “It’s the kids we’re really concerned about because if we don’t catch them now, if we can’t intervene, they are going to struggle the rest of their lives to stay out of poverty and homelessness when they become adults. There are just not enough services in Indy to help all the kids.”

If you would like to help the families at Dayspring, either by volunteering or providing donations, contact Cheryl Herzog at (317) 636-6780 or cheryl@dayspringindy.org. The agency’s website is dayspringindy.org 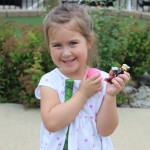 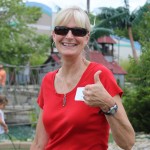 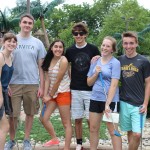 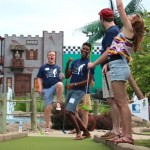 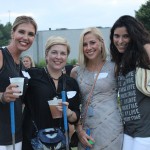 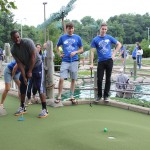 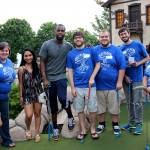 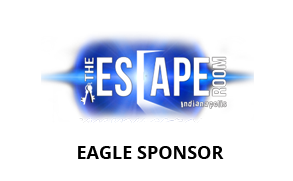 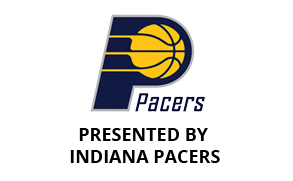 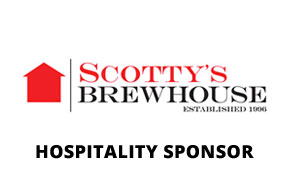 Family teams swarmed the music stand at Pirates Cove miniature golf for a chance to meet Pacer player, Rodney Stuckey, at Dayspring’s 7th Annual Mini-golf Classic. Rodney, along with his fiancé, Heidi, mingled with the family teams for over 30 minutes. The Mayberry family thanked Rodney on Twitter for having a stare down contest with their 6-year old!

During the Patron Party, corporate teams bid for Rodney to play 6 holes on the course with their foursome. In the end, Rodney Stuckey, matched the bid price! Celebrity auction team were Bottom Line Performance and Indiana Thermal Solutions.

In addition to the celebrity auction, corporate teams bid on several silent auction items, including a Peyton Manning autographed Colts helmet and a Rodney Stuckey autographed basketball and Pacers cap.

Congratulations to our Corporate Team Winners!

Thanks to Rodney Stuckey and Heidi, our sponsors, family/friend teams, volunteers, and prize donors, Dayspring Center raised over $28,000!  Monies raised will help to provide essentials, like regular meals and safe shelter, and support services for the 425 homeless children Dayspring Center assists each year.

MANY THANKS TO OUR SPONSORS!

Music to Advance Our Mission

Choirs from select Episcopal Churches in the Indianapolis area have gathered together to celebrate music and mission to help Dayspring Center. Featuring music by the choirs of Holy Family, Fishers; The Church of the Nativity, Indianapolis; St. Francis-in-the-Fields, Zionsville; and Trinity Episcopal Church, Indianapolis. Please click here to purchase CD’s or download songs at http://bit.ly/1xEYg1T. (i-Tunes) or *smile.amazon.com.

All proceeds from sales of this celebration of music and mission will be used to provide emergency care, essentials, and support services to Indianapolis-area homeless families and children at Dayspring Center.

*Attention Amazon Shoppers: Go to smile.amazon.com (same website as amazon.com) and select Dayspring Center as your charity of choice. Every purchase made through the smile website, Amazon will donate 5% back to the charitable organization of your choice.

“A Paycheck Away”- How Will Your Story End?

Last year’s Super Service Challenge driven by the Companies with a Mission (CWAM) was taken nationwide! With New Orleans Saint’s Drew Brees and his foundation heading up the “call to service”, over 700 organizations were represented in 3-minute videos recapping the service projects completed this past October and November by corporate and church groups around the United States. All were hoping to win their nonprofit organization a portion of the $1 million dollar prize money. On January 9, Indianapolis teams gathered at Latitude 39 to join in the simulcast with teams in New Orleans, Phoenix and New York for the award ceremony. Indiana teams took 14 of the top 29 awards! Long-time corporate partner, Willow Marketing, was recognized for their marketing services in the “30K in 30 Days” Campaign, raising $10,000 for Dayspring Center! MJ Insurance was recognized for the Autumn Festival they organized for the families at Dayspring and raised $1,000! Take a look at their winning videos at http://cwam.com/winners.