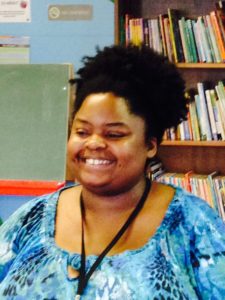 A Happy Ending for Aja and Her Daughters

Meet Aja, Mom of two teenage daughters. Aja came to Dayspring Center about four months ago. Following her diagnosis a year ago of a debilitating form of lupus, Aja was unable to continue working at her full-time position with the state. Her mounting medical expenses depleted her savings account, and medical insurance would no longer cover her treatments. Eventually, she could no longer afford basic living expenses and was evicted from her apartment. She recalled a place she had volunteered with her church several years ago. She made the call to Dayspring Center.

While at Dayspring Center, Aja was able to continue her medical care while looking for work. After four months, she has regained her strength and announced last week that she secured a part-time administrative position. She is hoping, in time, she will return to full-time work. Case managers are currently working with her to locate transitional housing. Aja holds two degrees. Education is a high priority for her and her children. She made sure her children attended their home school and continued to focus on their school work while at Dayspring Center. Both daughters are gifted students. Her eldest, Donna, is in the baccalaureate program at school, loves to read and speaks fluent Chinese. Her youngest daughter, April, excels in math and science and is the athlete of the family.

Aja is a survivor. But, she admits, without a place like Dayspring Center, her story may have ended much differently. Instead, she was able to access the resources she needed to get her lupus under control and be healthy enough to work. Although it wasn’t easy for her girls to move from a place of their own to a small room at Dayspring Center, Aja kept her daughters on course. She is grateful to Ms. Chaunte, our Children’s Services Program Manager, for organizing activities for the girls that kept their minds off of their situation.

When asked what she would say to a parent in similar circumstances: “Remember, it is only temporary. Knowing the situation does not diminish you as a person. Don’t give up. Know you can do it!” 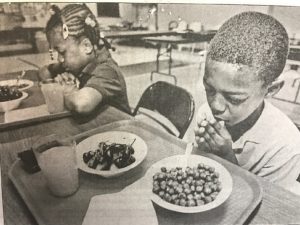 Through the Eyes of a Child – Deantá

When 11-year old Deantá and his 8-year old sister arrived at Dayspring Center in March 2008, they were already familiar with the heartbreak of losing a home. Six months ago, their mother dropped them off at their grandfather’s house and never returned. Unable to provide for her children, the grandfather gained temporary custody of his two grandchildren in January. A few weeks later, he lost his job and, in a matter of weeks, lost his home. As he contacted local emergency shelters, only Dayspring Center was able to accommodate his nontraditional family, especially one with a boy older than 7. Within days of their arrival, Case Manager, Carol, noticed how the grandfather tried to make life as normal as possible for the children. He kept them on a regular schedule of completing their chores, doing their homework, then free time. “I’m trying to get some stability because my grandchildren have been through a lot”, he commented at that time.

After a few weeks, the family settled in to the daily routine at Dayspring Center. While the children were in school, the grandfather actively sought employment and began to receive much needed medical attention for chronic health problems that had been ignored far too long. Deantá and his sister were doing well in school but the taunting from his peers for living at the shelter was difficult to bear. Carol commented, “Deantá was very intelligent and open. He often visited my office because he just needed someone to talk to.”

By the end of May, the economy was struggling, unemployment was on the rise and the grandfather was unable to find a job that would provide the income needed to provide for his family. The Case Manager at Dayspring Center enrolled the family in a program with a Dayspring partner where they could live in permanent housing and receive rent and utility assistance giving them more time to stabilize.

So the children would not be at home alone over the summer, Carol enrolled Deantá and his sister in Dayspring’s Camp Discovery, an 8-week summer program for homeless and formerly homeless children. There, they would participate in daily educational, recreational and social activities designed to help them discover their special talents and skills and prepare them for the coming school year. During one of the workshops with partnering organization Asanté Chidlren’s Theater, it was discovered that Deantá had a knack for acting. Months later, he would perform in one of the Theater’s main productions. 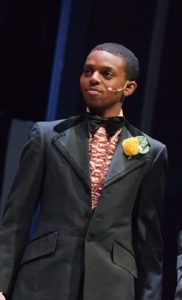 Less than a year after entering the program, the grandfather was able to find employment and soon after moved his family into a home of their own. Through Dayspring’s Follow-up Program, Carol continued to provide resources and guidance to the family during a difficult transition. In less than 6 months, however, the family had established a stable, healthy and happy home and no longer needed support services.

Last August, Deantá very confidently spoke (without a script) to over 300 people at Dayspring’s “Through the Eyes of a Child” Breakfast. His story was simple and direct.

“Ms. Lori (Executive Director) and Ms. Carol (Case Manager) made me feel at home at Dayspring Center. I don’t know where we would be right now without their help.”

“I get all A’s in school. I really like Math. Today, we have a house, a backyard and a dog – life is really good!”

Someone in the audience asked, “What do you want to do when you grow up?” With his endearing smile Deantá replied, “An engineer. Maybe even build some bridges!” There was no doubt in the mind of everyone there that someday it was exactly what Deantá would do.

Like many mothers at Dayspring Center, Charlene’s slow descent into homelessness began with tragic circumstances. It was 7 years ago, she found the courage to load her five children into the car, drive out of Cleveland and leave her abusive husband of nearly 15 years behind to start a new life in Indianapolis. Sadly, a “new beginning” was further away than Charlene ever imagined.

Once settled in a low-income housing unit near downtown Indy, Charlene began the difficult, nearly impossible task of raising five children, ages 1 – 14, on a minimum wage job. It wasn’t long before life took another drastic turn. Charlene admits she began socializing with the “wrong crowd”. Soon after, she was experimenting with drugs on a regular basis. Eventually, she was arrested for drug possession but did not have to serve time. Didn’t matter. The arrest was enough to stop the landlord from renewing her lease. No family, the wrong friends, and now, no place for her and her children to live. Charlene was out of options.

In desperation, she turned to the local homeless shelters. Only one had a vacancy for a mom with 5 children – Dayspring Center. Although Charlene would say, “It was the lowest point of my life”, she would also realize it marked her “new beginning”. Over the next 60 days, Charlene would have to stay drug-free, find a job, and comply with shelter rules to keep her family together. She would make it happen. As her time to exit Dayspring Center approached, Charlene had yet to face her biggest challenge. Though a high school graduate, Charlene lacked the skill set to earn an income needed to provide for 5 children. She was an ideal candidate for a transitional housing program. Upon the recommendation of Dayspring’s Case Manager, Charlene and her children could live together in a subsidized apartment, she could work while furthering her education and, with the help and guidance of an on-site case manager, achieve her longer term goals. Knowing she would be strictly monitored and required to adhere to the policies and procedures of the program, Charlene accepted. For the next 2½ years, every day put Charlene and her family one step closer to a new life. However, seeing “the light at the end of the tunnel” was not easy. Understandably, the daily obligation of school, work and mom to 5 children was often overwhelming. On many occasions, Charlene fought the temptation to pack up and move back to the life she left behind. She credits her numerous conversations with the case manager as “life-saving” ones.

It has been seven years since Charlene began her long and difficult journey. In June 2008, Charlene graduated with a degree in nursing. She has every intention of continuing her studies to become a registered nurse. She loves where she works and will remain with her current employer, only now, in a full-time nursing position. Her youngest was 1 year old when she left Cleveland and is now 8. Her eldest is 20. “I love my kids”, she says. “They were my reason to keep going”. In the same month she graduated, Charlene did something she never thought possible… signed her name to the bank papers and moved into her own house.

Charlene is all about moving forward now, creating a healthy and loving “home”. Today, depending on yourself and having a good education are the goals she has for her children, especially her girls. “Their life will be different and I thank God and Dayspring Center for that.”